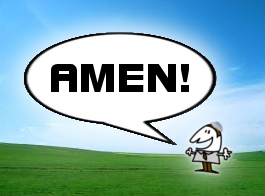 Judaism gives us many opportunities to acknowledge the gifts the Al-mighty has given us. This is done primarily by reciting short prayers — blessings — throughout the day. We say on Sabbath mornings that “if our mouths were filled with song like the sea… we would not be sufficient to praise You,” but these blessings at least remind us to try.

While this acknowledgement is of great value, the Talmud (Berachos 53b) writes that answering “Amen” to someone else’s blessing is an even greater statement than reciting the blessing itself. How can that be? How can a simple word of affirmation to another person’s blessing be greater than the actual blessing? Without the blessing, there would be no acknowledgement at all!

I saw the following answer from Rabbi Shimshon Pincus zt”l. We all know that people, even good people, tend to stretch the truth from time to time. But at the same time, we have a much lower tolerance for half-truths and corruption, even for simple mistakes, when they come from someone else. Suddenly all the excuses and explanations for our own “little white lies” go out the window, and we become champions of complete honesty and openness. Consequently, to affirm someone else’s lie, to conspire to make it that much more credible, is the ultimate form of falsehood.

When we recite a blessing, it is true that we are acknowledging the Al-mighty’s kindness. To the observer, however, it’s unclear whether we truly feel indebted to G-d for what He’s given us. Perhaps we are mechanically performing a religious duty, devoid of real concentration and sincerity. Perhaps the appearance of piety is just that; a show for the benefit of others. But when we answer “Amen” to someone else’s blessing, we’re “judging” their statement and affirming it as true. We raise the level of scrutiny, and thus a hearty “Amen!” demonstrates a more explicit acknowledgement of G-d’s gifts.

Here is an interesting extension of this concept. The Talmud (Brachos 45b) writes that answering “Amen!” to your own blessings is considered repulsive. When you feel a need to bolster your own statement by saying “Amen – it’s really true!”… well, then there’s good reason to suspect that you don’t quite believe it yourself!