Tuesday will be the Ninth of Av, historically the saddest day on the Jewish calendar. While it is something that I have mentioned any number of times, there are any number of dedicated Jews today who (1) speak about the importance of Jewish continuity, of ensuring Jewish survival into the future, (2) devote time, energy and money to Holocaust memorials, in order that the martyrs never be forgotten, and (3) ignore Tisha B’Av.

This deadly combination, endemic in the halls of Jewish federations across the US and elsewhere, strikes me as a particularly sad commentary on the state of our community. How can we be so blind?

Attendance at Holocaust commemorations is declining. The survivors are leaving us, and those without a long-term memory of Jewish history cannot create one ex nihilo to provide to the next generation of Jews. 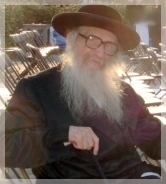 This week, a giant of Baltimore Jewry passed away. Rabbi Amram Taub zt”l lost his wife and young family in the Holocaust. He came here and built another… and helped build an entire community. His experience did not break him or leave him bitter — I do not recall ever seeing him with anything other than a radiant smile on his face, and this was a recurring theme of the eulogies at his funeral.

That same afternoon, a representative of a Jewish charity came to my door. Seeing that he was, like Rabbi Taub, a Chassidic Jew, I inquired if he knew (of) the Rav. He had been at the funeral, in fact. And, what is more, his parents were survivors as well. His father had also built a second family after the loss of his first, and he said his elderly mother still knows the names of all her great-grandchildren.

Despite the fact that his father avoided speaking of his experiences, his grandchildren are all growing up acutely aware of what was lost. The Jewish people has experienced a series of tragic losses throughout its history, many of which can be traced, directly or indirectly, to the tragic date of 9 Av. May we all, on the 9th of Av, recall who we are, what we lost — and, above all, what we have as Jews.