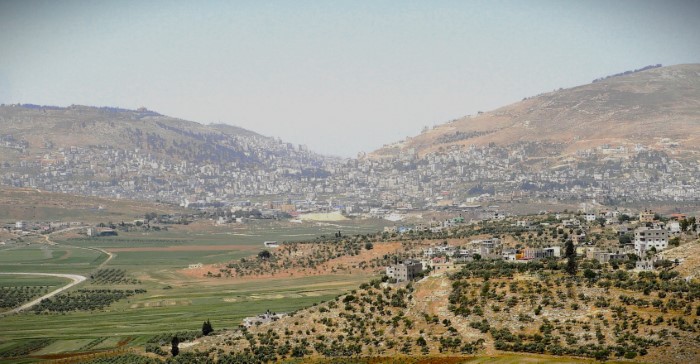 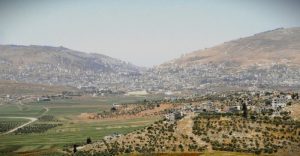 When the Jewish people were on the verge of entering the Land of Israel, Moshe (Moses) reminded them of the abundant blessings promised to those who follow G-d’s commandments, and the curses to those who turn away from the Torah and follow other gods. Upon entering the land, Moshe also told them there would be a national gathering on two adjacent mountains—Mount Gerizim and Mount Eval—where they would pledge their allegiance to G-d, accepting the blessings and curses of the Torah.

Gerizim and Eval are adjacent mountains on either side of the city of Shechem. Six of the Jewish tribes would stand on each mountain, and the Levites would stand in the center with the holy ark. The Levites would turn to Mount Gerizim to call out a blessing, and all those on that mountain would answer, “Amen!” They would then turn to Mount Eval to call out a curse, and those on that mountain would answer, “Amen!”

Try to picture this monumental gathering of the Jewish people, almost a reenactment of the Sinai experience. The resounding sounds of “Amen!” and the moving calls for blessing and curse echoing through the valley must have been awe-inspiring. But this site was not chosen simply for its acoustical properties.

According to tradition, these two mountains, although they directly face each other, have opposing physical properties. Gerizim, the mountain of blessings, is lush and fertile. Eval, the mountain of curses, is rocky and barren. I am told that this is still true today. Rabbi Samson Rafael Hirsch zt”l notes that they have these opposing natures although both mountains share the same geographical area, the same climate, and the same weather patterns. How could two mountains be so close to each other, yet be so different?

The message, writes Rabbi Hirsch, is that the effects of blessings and curses do not depend on the circumstances around us. We may be surrounded with blessing or curses, but the willingness to receive them comes from within us. Two people can be presented the same opportunities or the same challenges, but respond differently. If one chooses to capitalize on the opportunity, or refuse to be defeated by the challenge, with G-d’s help that person can succeed. If the other fails to meet the challenges, or fails to take advantage of their blessings, then he or she made a personal choice to succumb to the forces around them.

May we all be showered with many blessings—and have the strength to accept them, and make the most of those opportunities!