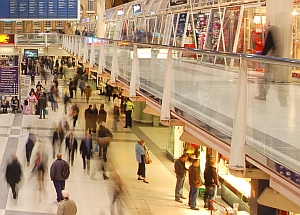 One Friday, Daniel Goleman, renowned psychologist and Best Selling author of Emotional Intelligence, was going down to the subway during rush hour. Suddenly, he noticed a shirtless man curled up on the side of the staircase, not moving. Hundreds of people were just stepping over him. Dr. Goleman had just finished an article on the homeless, which he had spent weeks researching at a social work agency that served the homeless. Since his “urban trance” had been weakened, as he puts it, as a result of his time at the agency, he found himself stopping to find out what was wrong.

Immediately after he stopped, half a dozen others joined him to assist the man. They found out that he didn’t speak English, was penniless, and after wandering the streets for days, starving, had fainted from hunger. Someone got some orange juice, another bought him a hot dog, and a policeman was called. The man was back on his feet, because someone noticed.

It was over thirty years since Jacob fled from Esau, after he learned of Esau’s plot to kill him. When Jacob discovered that Esau was now marching towards his camp with four hundred men, Jacob was understandably distressed. “Jacob feared greatly, and it distressed him (Genesis 32:7).” The Midrash addresses these two expressions of fear, and writes that his fear was for his life, but his distress was over the possibility that he might kill others.

Jacob had reached such an elevated spiritual level that his empathy for others was as keenly developed as his concern for his own safety. He was the target of a murder plot, yet Jacob’s focus included the welfare of those outside himself — even his enemies. We have an innate drive to survive, but our concern for the survival and well-being of others must be kindled and cultivated.

If we were, G-d forbid, sprawled across the subway stairs as hundreds of people stepped over us, we would be quite disturbed by the cruelty on display. We would know that pain intimately. Rabbi Noach Muroff recently returned $98,000 that he found in a used desk he bought through Craiglist (and I hope most of us would have done the same) but would we have done so if it were just $20? If it was my $20 that was lost, I know that I would want it back. To snap us out of our self-centered trance and see matters from another’s perspective needs work, for sure, but it’s important if we want to act according to the values we hold so dear. Only with tremendous effort can we reach the level of Jacob, who even while fearing imminent danger, was equally concerned with the lives of others. (Based on Tiferes Shimshon of Rabbi Shimshon Pincus zt”l).