Partner With the Infinite 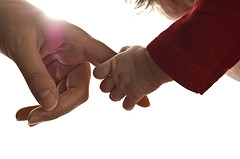 The Torah uses various names for G-d, and each one expresses a unique manifestation of G-d’s interaction with the world. One of the lesser-known names is “Sha-dai.” The literal translation of this name is “Who – Enough” which the Sages expand to “The One Who said to the world, ‘Enough!'” At creation, the dry land was limited by the sea, gravity was limited to a set level of strength, and rocks were limited to remain rocks. The Al-mighty’s abilities are without limit, but He set natural limits for the universe.

At 99 years old, having only one child from his maidservant, the future promise of a great nation stemming from Abraham looked bleak. It seemed certain that Sarah, 90 years old and barren, would not bear a child. G-d appeared to Abraham, introducing Himself as “Sha-dai” (Gen. 17:1). “I am the One Who put the limits on the world. You may see a dark future, but recall that I am the One who set those natural limits. ‘Go before Me and be pure, innocent’ (ibid.) While the limits may dim your aspirations, have the innocent expectation that I will act as I really can, beyond the confines of nature.” With reliance on the Al-mighty you need not be constrained by those deceptive limits.

We have goals, hopes, and dreams, but often the limits of nature prevent us from seeing them to fruition. The task at hand may very well be beyond our abilities and the thought is to throw up our hands in despair. While your hands are still up in the air, turn to the Al-mighty in prayer and put your reliance on Him. He set the limits on this world, and He can, and often will, go beyond the natural limits and show you the supernatural. (Based on Taam V’Daas, HaRav Moshe Sternbuch Shlit”a)