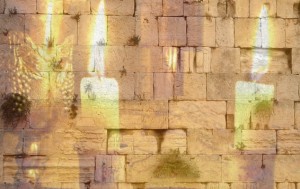 This year the ninth day of the month of Av (Tisha B’av), the day the Holy Temple in Jerusalem began to burn, falls on the Sabbath. This is a rare occurrence on the Jewish calendar and comes with a unique set of laws and observances, as the fast and traditional mourning practices are postponed until after Shabbos ends.

The idea that Shabbos overrides the mourning practices of Tisha B’Av demonstrates the sanctity of the weekly Shabbos holiday, but what becomes of Tisha B’av? How can the day the Holy Temple began to burn pass without some form of outward commemoration?

The Talmud (Megillah 5b) says that Rebbi wanted to “uproot” [La’akor] Tisha B’av completely, when it fell on Shabbos, reasoning that once it’s pushed off, it should remain so. While the Hebrew word La’akor is usually translated “to uproot,” it can also mean, in a homiletical sense, to declare as the root (Ikkar), the essence. So the passage can also be read as saying that Rebbi pointed to a Tisha B’av on Shabbos as showing the true essence of Tisha B’av.

Why do we mourn on Tisha B’av? Why not come to terms with the fact that the Holy Temple is gone, accept G-d’s judgment, and make the best of Jewish life without a Temple? Isn’t it an essential Jewish value that we should accept G-d’s decrees? Well, yes, that is true for all of G-d’s decrees — except the destruction of the Temple. For nearly 2000 years, Jews have sat on the floor, weeping through the stirring descriptions of Jerusalem’s destruction and the tragedies faced throughout their history in exile. Every day they have prayed for a rebuilt Jerusalem. These demonstrate an intense national longing to reunite with G-d’s Presence, in a way that could only be felt in the Temple in Jerusalem. When lovers are separated, their bond is shown in their yearning to return to each other. That thirst to reconnect with G-d is the true essence of Tisha B’av.

This Shabbos, we push aside all the physical expressions and challenge ourselves to sense the emotional yearning hidden within us, the yearning to reunite with our beloved Creator. This Shabbos demonstrates the essence of the mourning, ultimately reignites within the Jewish conscience the dream of rebuilding, and lays the foundation for the final return to Yerushalayim HaBenuyah (Jerusalem Rebuilt). We pray that it come soon. (Based on Nesivos Shalom pg 307)

Please share your thoughts on this and your own feelings about Tisha B’av.