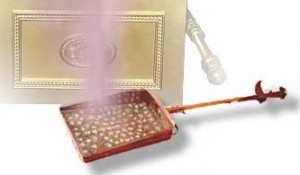 In the story of Korach’s rebellion (Numbers 16-17), 250 men join the campaign against Moses. While Korach and his partners Dathan and Abiram are punished with the earth miraculously swallowing them alive, the 250 men meet a different, more honorable fate. While holding fire-pans filled with incense, they are consumed by a fire emanating from G-d’s presence in the Tabernacle. After their death, Elazar the priest is told to gather the fire-pans and build them into the structure of the Tabernacle’s Altar to serve as a sign for all to see.

What was this sign? The text later explains it would serve as a reminder that no one but the priestly family should serve in the Tabernacle. But it’s interesting that this reason is only given after the fire-pans are hammered into the altar. The original instructions to Elazar simply state they should be a sign, implying that there was another, stand-alone purpose.

The Netziv (R. Naftali Tzvi Yehuda Berlin, 1816-1893) understands that while Korach ultimately campaigned for his own honor, the 250 men acted with the purest of motivations. Their love for G-d burned in them, and they yearned to express this love through the physical service in the Tabernacle. Not being of the Tribe of Levi, they never had that opportunity. They reasoned that through Korach’s rebellion they could finally demonstrate their willingness to give their very lives to the service of the Al-mighty.

These 250 men were wrong to leap to levels of spiritual service that were beyond their grasp, but their pure intentions did not go unrecognized. They were honored with a death by Divine fire, and their fire-pans were then put on display as a tribute to their burning love for G-d.

Pure and honorable intentions can sometimes lead to a deviation from the path of G-d, and there are, unfortunately, consequences for that. Nonetheless, G-d wanted a sign posted on the altar that He will never overlook the pure motives that inspire us. We want to come close to Him, yet we often make mistakes in the process. Regardless of whether we successfully attain the closeness we seek, there’s a sign on the altar acknowledging the spiritual hope and love that motivated us.