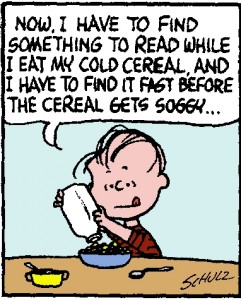 Linus, of Peanuts comic strip fame, sits down for a bowl of cereal. After pouring the milk he runs off to find a book to enjoy with his cereal. First he looks for the sports section of the paper or the comics, but he can’t find either. He nervously scans the bookshelves for a book he hasn’t read, but there’s nothing to his liking. With visible desperation on his face, he runs to the comic books, flips through a few until he’s finally satisfied — he finds one that he hasn’t read. Now panting, but ever hopeful, he hurriedly returns to his cereal bowl to discover the obvious — it has long since gone soggy.

While the Heavenly gift of Manna was falling daily, many of the Jews in the desert reminisced about “the delicacies” of Egypt. They cried, “Who will feed us meat?” After the miraculous Exodus, the splitting of the sea, and while Manna fell from the sky, more faith, gratitude and self-control was expected of them. Ever patient, G-d promised they would have their meat in the desert, but with the warning that they would eat so much of it that they would become sick and die. With another open miracle, G-d directed a massive flock of quail towards the encampment. Anxious to fill their desire for meat, the people collected heaps of quail, feasted on their find, and before the supply was finished, many had met their deadly end.

What I find telling is that no one was forced to eat the quail. In fact they were warned that they would be tempted, and in the end the pursuit would kill them. It becomes clear that a warning from G-d Himself, even while His loving Manna rains from the sky, will not stop one whose sole focus is physical comfort. All the values one holds dear, building a family, a career, staying healthy, or, for Linus, enjoying a bowl of crisp cereal, will be forfeited for the sake of soothing even minor discomforts. Continually remind yourself of what you truly hold dear, and with G-d’s help you’ll maintain the proper focus and not sacrifice life for comfort.