The Powers That Be 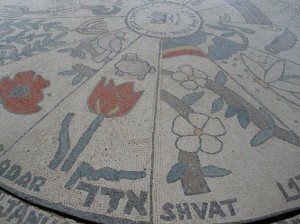 This week, I cannot refer to “this week’s reading” and be universally accurate. The Torah portion read this week in Israel is “out of sync” with the rest of the world, a phenomenon that will continue for another month. This is because while Israel celebrates the holy days of the three festivals on one day each, those living outside Israel celebrate them for two. Since the last day of Passover was on Friday this year, in Israel they read Parshas Shemini on Shabbos, while outside Israel, we read the special reading for the eighth day of Passover, and will read Shemini this week.

This causes a minor inconvenience for many people. Many apps and webpages written in Israel, for instance, refer to a different Torah reading than those written outside it. This week, many who are about to travel to Israel will walk to places where they can listen to Israel’s reading in order to “catch up.”

Now of course, you can find some people today who say that we really should only have one Passover Seder. This usually comes from the same sources that claim that Ashkenazic Jews shouldn’t care about eating kitniyos (legumes, rice, etc.) on Passover anymore — and that oh, by the way, the traditionalists are so monolithic! As I have written before, we should celebrate the diversity of customs that have developed over thousands of years of Jewish history, all surrounding a common core of Torah and Rabbinic legislation designed to encourage us to come closer to G-d.

For the record, I recently saw a webpage which explained accurately that the reason why Jews outside Israel observed two days of the holidays was because the community in Babylon could not receive timely word from Jerusalem concerning which of two possible days was consecrated as the new month, because this was done only based upon eyewitness testimony before the Sanhedrin, the supreme religious court. The same page, however, also asserts that this practice “continued even after mathematical models made it possible to calculate the date of the new moon.”

This latter statement is inaccurate: the mathematical models were in Jewish hands from the time that the Torah was given, to a degree of accuracy that required NASA to replicate. That is why we can still rely upon the calendar established by Hillel Sheni (the second Rabbi Hillel), although it is nearing two millenia since his lifetime. He created a set calendar not because he had developed a mathematical model, but because he recognized that there would soon not be a Sanhedrin to receive witnesses! The festivals still carry with them the message that the Jewish people has the ability to affect the entire world, spiritually, by affecting the time when the spiritual powers encapsulated within the festivals come into the world once again.

One day soon, we should hope to see the day when everyone returns to Israel, observes one day of all holidays, and a cloudy evening might affect when they are!