Give it a Rest 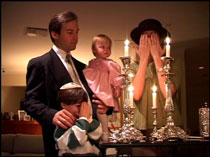 Many people labor under the misimpression that the traditional Jewish Sabbath, (Shabbos or Shabbat, depending upon whose pronunciation you use) is a limiting experience. You can’t go places, you can’t do things, you can’t even pick up the telephone and call a friend. It doesn’t sound inviting or interesting when put in those terms. It sounds like an experience in self-deprivation, akin to the lives of Buddhist monks or the Amish — you might want to visit, but most of us wouldn’t want to live like that every week.

So how can it be that the Torah speaks about the Sabbath in glowing terms? I don’t just mean the written Torah, which tells us that it is a sign and remembrance of both Creation and the uniqueness of the Jewish people, but the Medrash, which goes much further. The Medrash describes G-d saying that He has a unique jewel in his storehouse called Sabbath, which he is giving to the Jews. Who would turn down a valuable diamond? A free and very valuable gift certainly doesn’t sound limiting.

Rabbi Emanuel Feldman recently wrote an article comparing the Sabbath to vacation destinations described in a travel column in the New York Times on January 1. These expensive resorts provide no televisions, and no Internet! [Actually, Rabbi Feldman only wrote that there’s no wireless Internet, so I don’t know if there are ports in the rooms to plug in laptops.] The writer identified less expensive options, including software which disables all Internet connections for eight hours in order to take time off from the world. Even further, the writer mentions friends who observe an “Internet Sabbath” every weekend, “in an effort to preserve their sanity.”

And also in the news, the well-known TV host Oprah Winfrey recently visited the Lubavitch community in Crown Heights. She was impressed both by the spirituality of the Sabbath, and the understanding of how electronic devices can pressure and limit us.

The Sabbath is something every Jewish person should visit (there’s even a website to help arrange it) … and who knows? You might find that you really do want to “live there” every week.