Challenging Authority “for its own sake” 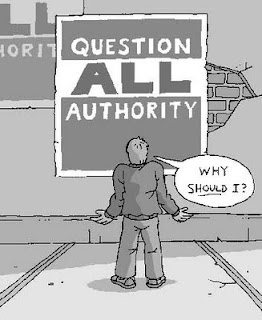 This week’s reading describes the miracle of the Mahn (Manna), the miraculous bread which G-d gave to our ancestors to eat in the desert. The people said they were hungry, they complained, and they were given an open miracle in return — along with instructions. They were told to gather only what they needed for the day, except on the sixth day, when they were told to gather a double portion for the Sabbath.

So almost everybody did exactly what they were told to do. But the Torah tells us that “they didn’t listen to Moses, and men left it over until morning, and it became wormy” [Ex. 16:25]. Who didn’t listen? The Medrash tells us: Dasan and Aviram.

You just have to ask, who were these guys? In modern language, what was their problem?

We first meet Dasan and Aviram much earlier. Moses goes out and sees an Egyptian beating a Jew, and in order to protect his brother from death, he kills the Egyptian. The next day, he finds Dasan and Aviram fighting with each other, and he says to the attacker, why are you hitting your friend?

He answers back, “who made you ruler and judge over us? Are you saying you’re going to kill me like you killed the Egyptian?” The Medrash says that what Moses found so frightening about this exchange is that there were wicked people, informers among the Jews.

But they weren’t simply informers, they were troublemakers at every opportunity. They finally met their end during the rebellion of Korach, which they joined. Korach was jealous of Moses and Aharon for the honor they received. But if Korach had become the leader instead, Dasan and Aviram would still have been simply members of the tribe of Reuven. What did they stand to gain from getting involved in the argument?

They were obviously sincere to a certain degree, because they merited to be part of the Exodus. But they could not get over their desire to challenge authority, apparently simply for its own sake. Even on something so trivial as gathering extra Mahn, they couldn’t resist seeing if they could find a flaw in the orders Moses gave them. And that was the same trait that eventually led to their deaths in Korach’s rebellion.

But that’s not really relevant to us today, is it? I mean after all, we don’t find people today, apparently well-meaning in some way, but acting out, against authority, just “because,” do we? Or perhaps it is more common than ever.