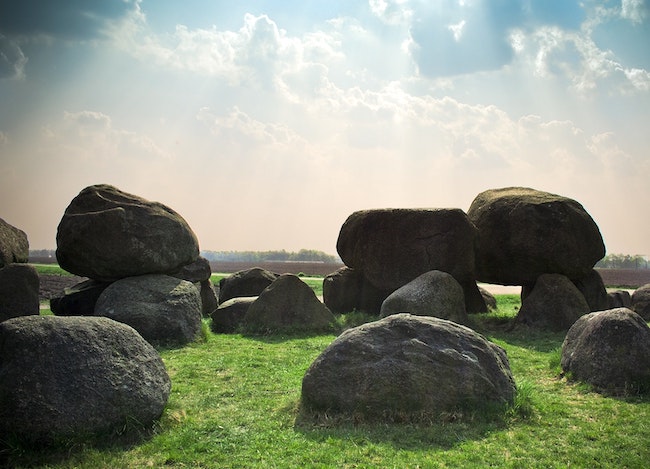 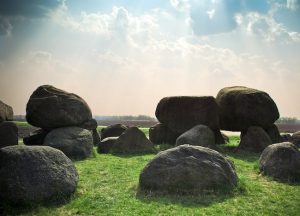 Yaakov (Jacob) leaves home, journeying towards Haran, where he knows his uncle lives, hoping both to find safety from his brother, and to marry a daughter from his uncle’s family.

At the end of his first day travelling, the verse says that “he came to the place, and rested there because the sun was setting” [28:11]. But what is “the place” to which he came? The Medrash says that it is the same one mentioned earlier, “and he saw the place from a distance” [22:4], referring to the site of the Akeidah, the binding of Yitzchok to be a sacrifice — which is also the site where the Holy Temple would later be built. Yaakov slept upon holy ground.

When he prepared to sleep, Yaakov built a shelter: “and he took from the stones of the place and put them around his head, and he lay down in that place” [28:11]. And then, after his dream of the ladder, and his realization that he was in “the House of G-d” [28:17], the Torah says: “And Yaakov rose in the morning, and he took the rock that he placed around his head” [28:18] — and this seems contradictory. When he went to sleep, he took several stones and put them around his head. When he rose in the morning, the Torah says that he took the one, singular rock that was around his head.

There are multiple explanations in the Medrash. Rashi tells us one of them, that the stones argued with each other, as it were, each one wanting Yaakov to rest his head upon it. So G-d transformed all of them into one rock, so that there would be no argument.

Yet at the same time, Yaakov expresses no surprise when the rocks are transformed to one. There is another Medrash that explains this, quoted by Rav Gedaliah Schorr zt”l. This Medrash says that Yaakov prayed it would be so, that the stones would combine to one, and that this would be a sign that he would raise twelve tribes.

According to this Medrash, Yaakov arranged twelve stones around his head before going to sleep. And Yaakov knew prophetically, regarding the twelve tribes of Israel, that each would have its own distinct nature, its own strengths and weaknesses. He wanted to know that in the end, they would all unify and work together.

Yaakov received the prophetic sign that he was hoping to see. When he rose in the morning, there was only one, single stone. He was told he would indeed have twelve tribes, but they would all work together, contributing their strengths towards the whole.

Unity does not mean everyone doing the same thing, and fulfilling the same role. Unity means working together towards a common end, which, in the case of Israel, is to grow spiritually and transmit our heritage to the next generation. Yaakov saw, prophetically, that we would continue to do so throughout the generations, and it is upon each of us to merely fulfill our part. Unity is something we are destined to achieve.