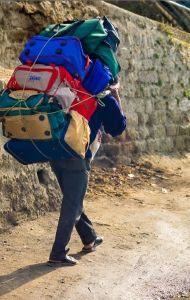 In this week’s reading, we learn about the episode of the Golden Calf. Moshe took a day too long to come back down off the mountain, and many assumed that he must have died, that he was never returning to earth. And so they made a new leader for themselves, and some even worshipped their new idol.

At this point, G-d said to Moshe: “go descend, for your nation has corrupted itself, which you brought up from the Land of Egypt” [32:7]. And Rashi comments, “descend from your greatness, [for] I only gave you greatness because of them.” According to Rashi, Moshe only “deserved” to be up in the Heavens, learning Torah from G-d Himself, because of Israel. Once Israel corrupted itself, Moshe could no longer remain in that elevated place.

Moshe grew up in Pharoah’s palace, and in adulthood ran away to Midyan. So he was, in many ways, separate from the rest of the nation of Israel. His experience with the Burning Bush was exactly that — his experience, and no one else’s. His spiritual elevation did not depend upon other Jews, or so it would seem. But all of that changed once Israel became a nation. Now, when Israel sinned, G-d told him: go down. Your nation is lower, so you must be lower.

Our Sages teach that “all of Israel is responsible one for the other.” In its simplest form, we understand from this that a person is responsible to help others to do the Commandments. If we see someone else about to make a mistake, we are not free to say “oh well, it’s not our problem.” On the contrary, it is our problem. We must alert him or her, in a helpful way of course.

But what we learn from G-d’s words to Moshe is that this idea, the concept that we are all responsible for each other, is even true on a metaphysical level. What we do has a spiritual impact upon others. We can help even the greatest of Israel’s leaders to reach greater heights, by striving for greater heights ourselves. The spiritual elevation of Moshe himself depended upon that of the rest of Israel.

An individual can always fall into the trap of thinking him or herself “insignificant.” “I’m just the quintessential ‘little guy.’ It doesn’t matter what I do, I won’t accomplish much anyways, the world goes on without me.” The Torah is telling us that each individual contributes in ways that he or she cannot even begin to perceive. No individual is insignificant, because each of us has the ability to elevate everyone else. Each of us contributes our part to the spiritual level of all of Israel, building a better future not merely for each of us as individuals, but for all of us together.