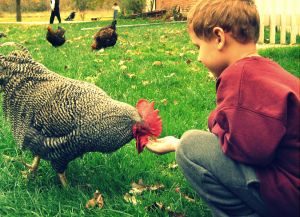 Moshe and Aharon go to confront Pharoah and demand that he release the Jews. Pharoah demands a sign, and, as Commanded, Aharon throws his staff on the ground in front of Pharoah , where it turns into a snake.

Pharoah calls in his magicians, and lo and behold, they do exactly the same trick.

Then what happens? “The staff of Aharon swallowed their staffs” [Ex. 7:12]! Aharon’s snake wasn’t a mere trick… his staff had turned into a living, breathing, eating snake. Actually, the Talmud [Shabbos 97a] tells us that Aharon’s snake turned back into a staff before swallowing the others (one miracle within another).

The Talmud [Menachos 85a] also records a fascinating, even bizarre exchange between Pharoah’s magicians and Moshe. They said to him, “Egypt is filled with sorcerers. You’re coming here to do sorcery?”

And Moshe responds, “it’s like they say, to a city where they sell lots of vegetables, you take your vegetables to sell [because that’s where the buyers will be].”

Rabbi Yaakov Galinsky asks, what sort of answer is that? This was Moshe’s opportunity to say that what Aharon’s staff had done was obviously above and beyond mere magic, that they were G-d’s messengers!

He tells a story about a young man who had grown up on a very secular kibbutz, and began to study in yeshiva. The kibbutz, believing in freedom of choice for all who agree with them, refused to release his identity documents, so the Rabbi went together with this student to a government office to help him file paperwork and obtain new documents.

They were traveling by train, and lo and behold, one of the student’s old friends from the kibbutz recognized him, and began to berate him for joining the “mindless fools” in yeshiva. Recognizing that a war was about to break out, and knowing that the poor student had been studying for only a few weeks, the Rabbi prepared to intervene. But the student quickly answered, “leave it, David. You let me be a fool like the Chazon Ish, and I’ll let you be enlightened like Yoskeh!”

And that was that. David walked away. So Rabbi Galinsky asked the student, “who is this Yoskeh?”

And the student replied, “he’s the one who feeds the chickens.”

We understand why the magicians initially believed that Aharon was merely performing magic with his staff. But by the end, it was obvious that his staff became a miraculous, living being, not merely the product of sorcery. So it was obvious that the magicians merely wished to use mockery to take away from the seriousness of what they had witnessed. At that moment, it became impossible to have a serious discussion, only to respond to the mockery in kind.

Today, the word “mockery” itself seems outdated. Anything and everything becomes grist for “late-night comedians,” to the point that many (nearly 1 in 8) Americans admitted that they received their “news” from a popular comedy show. We lose the opportunity to have a serious discussion about a host of serious issues, because someone insists upon making it into a joke.

Our Sages tell us that a brief joke can take away 1000 words of serious thought. We should capture moments of inspiration when they come, rather than, like the magicians, finding a way to laugh them off!