The Value of a Smile 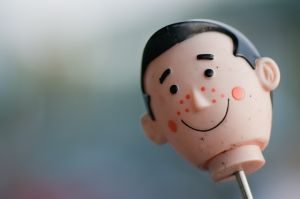 Before his passing, Jacob blessed Joseph’s sons, and then his own. Our Sages explain to us that each blessing is filled with prophetic insight, words which each brother in particular, the brothers overall, and all of their descendents, needed to hear.

And when Yaakov turns to Yehudah (Judah), he knows that the Kings of Israel will come from his family. “Your father’s sons will bow before youâ€¦ The scepter will not leave Yehudah, or the staff of the ruler from between his feet, until Shiloh comes” [49:8,10]. And he blesses him with abundance: “His eyes will be read with wine, and teeth white with milk” [49:12].

Our Sages see a deeper thought contained in the second phrase of this verse.

A similar thought is found in the Avos D’Rebbe Nosson:

A man once walked into a subway station, and as he was going in, the proprietor of a kiosk recognized him and hurried over to greet him. The fellow walking in, however, didn’t recognize him.

So the proprietor reminded him that they had met several months earlier. At that time, the proprietor only had a small collection of pencils, which he was selling in order to make a living. The fellow thought he was a beggar, gave him a quarter and continued on. But the proprietor ran after him, until he caught up and gave the man his pencil.

The proprietor said that the man’s comment touched him. He realized that he was indeed a “merchant,” selling people something that they needed. And he began to sell more actively, until he was able to afford a kiosk selling a host of different items. And he told the man that he could have whatever he wanted, because it was only thanks to his comment that the proprietor began to think of himself as a merchant.

Our Sages understood this very well. A simple comment — or even a facial expression — can brighten another person’s entire day. It could even change a life!