The Recurring Lies of Laban 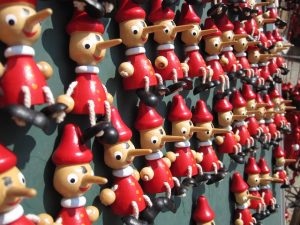 The story of Laban and Jacob is critical to our understanding of anti-Semitism, the pernicious hatred of Jews. We know this from the Passover Haggadah — we learn briefly about Pharoah, read that this hatred happens in every generation, and then continue, “go and learn what Laban the Aramite want to do to our father.”

Why is Laban important here? Rabbi Naftali Berlin (the Netzi”v), famed dean of the Yeshiva in Volozhin, explains: because Yaakov is the father of all Jews, and Laban is the paradigm of the anti-Semite.

Laban is fundamentally dishonest. We see this multiple times.

He and Yaakov make a deal: Yaakov offers to work for Laban for seven years, simply for the privilege of marrying Rachel, his younger daughter. And Laban deceives him, setting him up. Laban puts a veil over the face of his older daughter Leah, and brings her to him.

When Yaakov realizes that he has been deceived and confronts Laban, what does Laban do? Blame Yaakov! “We don’t do things that way here, to marry off the younger daughter first.” In other words, “Yaakov, this is all your fault.”

Yaakov faithfully works another seven years, and then says he should go back to his own land. Laban recognizes that he has been blessed by Yaakov’s presence, and asks him to stay. So they make a deal, again, regarding which of the flock would belong to Yaakov in return for working as a shepherd. Laban repeatedly changes the deal, to make the terms more favorable to himself — the verse says he did so ten times, but the Medrash says that this means tens of times, totaling 100.

Despite Laban’s dishonesty, Yaakov performs his work faithfully — and becomes wealthy. What is the reaction? Yaakov overhears Laban’s sons claiming that all that Yaakov has is “taken” from their father! Later, when Yaakov shows Laban that he has been scrupulously honest, above and beyond what was required of him, Laban’s response is “everything you see, is mine.”

It has always been this way: that at the core of anti-Semitism is the belief that everything the Jews have, they have stolen, rather than acquired honestly. And it is projection, coming from dishonest people who want the wealth of others for themselves.

Of course there is more to it: Laban wants to do away with Judaism itself, claiming that he could harm all of them were it not for G-d instructing him to leave them alone. And that, of course, is a core element of anti-Semitism as well.

Our response must be like Yaakov’s — to be so honest and ethical that we know the charges are silly. When we do this, it becomes obvious to all neutral parties that it is simply baseless hatred. This is our best response to the lies of Laban!