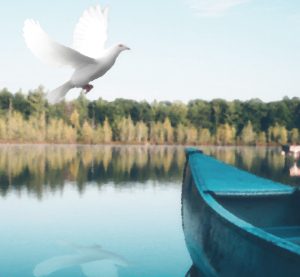 In this week’s reading, G-d gives Pinchas His “Covenant of Peace.” He also makes Pinchas, Aharon’s grandson, part of the Kehunah, the priesthood. [As he was born prior to the anointing of Aharon and his sons, Pinchas did not become a Kohein until this point. Rash”i, Bav. Zevachim 101]

This seems an extraordinary response to a violent act. Pinchas killed Zimri, head of the tribe of Shimon, and the Midianite woman that Zimri openly took into his tent to encourage immorality. We can understand how this deed might “turn away the wrath” of G-d towards Israel, but how can it be called peaceful?

The Medrash teaches that when G-d wanted to create man, He first consulted with the angels — as the verse says, “Let Us make man” [Gen 1:26]. And when He did so, the angels argued with each other, divided into opposing camps.

In Psalms [85:11] we read: “Lovingkindness (Chesed) and Truth (Emes) ‘encountered’ each other, Righteousness (Tzedek) and Peace (Shalom) ‘kissed’ each other.” The word for ‘encountered’ is similar to when Yehudah approached Yosef to fight over the fate of their brother Benyamin [Gen. 44:18], while when Esav ‘kissed’ his brother Jacob [Gen. 33:4], the Medrash teaches that he intended to kill him.

In the argument, Chesed said that man should be created, because he would do acts of lovingkindness. But Emes said that man should not be created, because he will be filled with falsehood. Tzedek argued in favor, because man would do righteous deeds, but Shalom said no, man would be full of arguments and strife. So what did HaShem do to resolve the argument? He took Emes, Truth, and cast it to the ground!

The Kotzker Rebbe was known for his sharp, penetrating insights. And he asked, how does this resolve the argument? G-d “threw Emes to the ground.” It seems unfair, and besides, Shalom is still arguing against the Creation of Man. So how does removing Truth solve anything?

And he answered: “without Truth, Peace is easy!”

But of course, as he also observed, peace without truth is a false peace.

In order to have true peace, there must be truth. Pinchas acted to ensure that all who knew of Zimri’s sin, rather than be lured into duplicating that crime, instead would follow the path of truth — the path of G-d. Peace between Israel and their G-d is True Peace, and that is what Pinchas hoped to ensure.