The Power of Groupthink 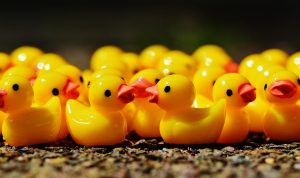 This week’s reading begins with the rebellion led by Korach against Moshe’s leadership. The first half of the reading discusses the rebellion and what transpired afterwards, so clearly there is much to learn from this story.

Korach sought honor and greatness. He was Moshe’s first cousin, and he felt slighted when Moshe, at G-d’s Command, appointed a different cousin to lead the family of Kehas ben Levi. Kehas had four sons; Amram was the oldest, and Amram’s two sons — Moshe and Aharon — were the leader and High Priest of the Jews. The next son of Kehas was Yitzhar, but the appointed leader of the family was not Korach ben Yitzhar, but rather Elitzafan, son of the youngest brother, Uziel. Korach believed that Elitzafan was given an honor that was rightly his own.

He also knew, however, that others would not join a rebellion for his benefit. What was in it for them? It’s like our Sages say: “Ayn adam choteh v’lo lo” — a person does not sin unless doing so is “his,” meaning, to his own perceived benefit. So Korach gave different people different reasons to join his rebellion.

He told the other Levi’im, why did Moshe limit the Kehunah, the Priesthood, to Aharon and his sons? Why should your sons merely be their assistants?

To the firstborn of other tribes, he said, why did Moshe take the leadership away from you, the firstborn, and give it to his own cousins the Levi’im instead?

And to the family of Reuven he said, why did Moshe give the Kehunah to his own brother, and not to your family, that of Yaakov’s firstborn son?

The tribe of Reuven camped on the same side of the Holy Mishkan (Tabernacle) as the family of Kehas, prompting our Sages to observe: “woe unto the wicked person, and woe unto his neighbors!” Because their families were nearby, Korach was more able to spread his evil ideas to them.

People like to imagine that they are objective and impartial analysts of a situation. The reality is that we are tremendously susceptible to peer pressure, and once a group adopts a particular ideology, every member of feels a hidden pressure to conform. And today, with the Internet, you don’t need to live next door to be exposed to evil ideas masquerading as just and good causes.

One person was mentioned as an early adherent of Korach’s rebellion, yet was not killed: Ohn ben Peles, of the tribe of Reuven. How was he saved?

Women have tremendous influence over their husbands. Korach’s wife encouraged him to rebel; Ohn’s wife, on the contrary, saved him. She asked him: what does it matter to you if the Kohen Gadol is Aharon or Korach? Either way, it’s not going to be you, so how do you benefit?

At that point, Ohn confessed to his wife that he was feeling the peer pressure: he had given his word that he would participate in the rebellion the following day.

So what did she do? The Medrash tells us that she first got her husband drunk and put him to bed. Then, she took off her head covering and let down her hair, and she and her daughter sat at the entrance to the family tent. So whenever someone came to collect Ohn, he saw the women with their hair down and turned away! This is why Ohn’s life was spared.

Why was it necessary to get him drunk first? Because she realized that even if he saw she was right, he was still vulnerable to peer pressure. He might have come out of hiding and gone along with them, simply to avoid their knowing that he wanted to back out!

Peer pressure, Groupthink, is incredibly powerful — and incredibly dangerous. Are we choosing our path because it is right, or because it is popular among our friends? None of us are immune, as we learn from the story of Korach and Ohn.