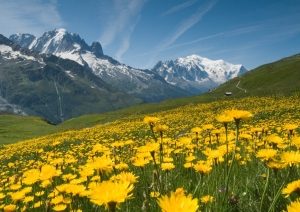 The Torah teaches that at Sinai, G-d did not reveal Himself to a single individual. Rather, He spoke to the entire Jewish nation.

Rabbi Moshe Maimonides, the famed Jewish scholar of over 800 years ago, calls this event the foundation, the “pillar upon which our belief revolves.”

Why is this not circular reasoning? The answer is that this event is not something taken on faith, itself. Every Jew today knows that at least until recent generations, his or her forebears believed that this event actually happened — Maimonides says â€œthe best of all witnesses testifiedâ€ about it.

He points out, further, that there has been no similar event in history, and that the Bible itself tells us that this will never happen again. Moshe warns the Jewish nation to never forget “the things which your eyes saw,” and to teach this to the next and following generations [cf. Deut. 32].

Many have tried to explain that this was merely a story, that it never actually happened. But when they try to explain it in detail, an alternative story stops making sense.

Imagine a village in Brazil, along the Atlantic Ocean, that holds a festival every spring. The festival, they tell you, is a celebration of a miraculous event 400 years ago, when a flood swept through their community. The flood did massive damage, washing away entire buildings, yet afterwards not a single villager had perished. And they celebrate that miracle with an annual event. And they present you with records copied by hand from originals dating all the way back to that period.

Would anyone disbelieve the story? Would people argue that the village elders just made it up at some point? Everyone would agree that this almost certainly happened; there is no reason to discount it.

When we look around us today, we see billions of adherents of religions based upon Judaism. There are literally hundreds of religions and sects which claim that they and they alone have the correct theology. There are Sunni and Shiite Muslims, Catholics, Presbyterians, Anglicans, Methodists, Baptists, Greek Orthodox, Russian Orthodox, Mormons — and the list goes on — most of which differ on core theology.

Obviously, the best way to start such a religion would be to create the tale that G-d Returned, spoke to a new group of believers, and explained His new rules. But the Torah asserts that “when you shall look back at the days before you,” you will see that this story was never told prior or after Sinai. The Rambam elaborates: “that there was never anything like this prior, and there will be nothing like it afterwards, this being that an entire individual nation shall hear the words of the Holy One, Blessed be He, and that they shall see His Glory eye to eye.”

Maimonides teaches that this has not been done, because it cannot be done — because the Jewish Encounter with G-d is truly unique in human history.