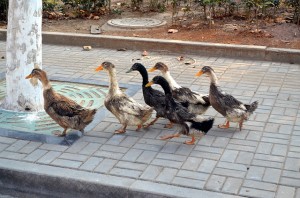 In this week’s reading, we learn of the deaths of the two eldest sons of Aharon HaKohen, the High Priest. “And Nadav and Avihu, the sons of Aharon, each took his censer, and put fire in them, and put incense on each, and brought before G-d a strange fire, which He had not Commanded them. And a fire went out from before G-d and consumed them, and they died before G-d.” [Lev. 10:1-2]

The commentaries help us to understand what it was that they did wrong. Why was a fire-offering inappropriate, and why did it warrant such a dramatic response?

One explanation offered by the Medrash is that they did not consult with their father or their uncle Moshe prior to making this offering. The Medrash even says that they were looking forward to the time that Moshe and Aharon would leave this world, imagining that they would then become the leaders.

Now both Nadav and Avihu were loyal sons, and they were both on an incredibly high spiritual level. How can the Medrash say that they were looking forward to the time when their father had passed away?

It could well be that the Medrash is telling us their subconscious motivation, which they might have not expressed or even recognized within themselves. Great as they were, the Medrash implies that they did not recognize the need to seek guidance before acting. They were not, as yet, in charge. And they had to consult with the leaders of the people, those who could tell them what was beneficial or appropriate.

Precisely because they were on a high spiritual level and dealing with the highest levels of holiness, the greatest level of sensitivity was required. This is why the consequences were great.

Our Sages tell us that a person must “make” a Rav for himself [Chapters of the Fathers 1:6], to find a Rabbi and teacher who can provide advice. This is the Jewish path, a tradition given from teacher to student throughout the generations.