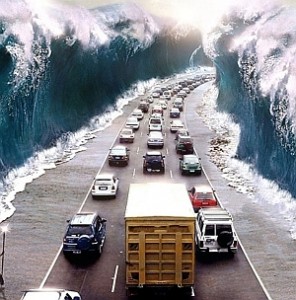 This week, we read about the formation of the Jewish people. They are taken out of Egypt to form a new nation, and the first thing the Jewish people see is an open miracle: the opening of the Sea to let them cross.

Shortly after letting the Israelites go, Pharoah regretted his decision, and he and his army came chasing after them. The newly-freed Jewish people naturally feared for their lives, and, downtrodden after centuries of slavery, began to lose hope.

The Medrash says that the waters did not separate until Nachshon ben Aminadav entered up to his neck. The message was clear: although one should never rely on miracles, sometimes it’s going to take a miracle to get through. And miracles will happen.

When you think about it, all of Jewish history is a miracle. When a nation is exiled and dispersed, it fades away. When it is oppressed and hated, it is more rapidly abandoned. Its members simply dissolve into the surrounding culture. Yet the Torah tells us that despite all of these empirical truths, the Jewish people will be dispersed, will remain few in number, will find themselves hated and pursued in host countries — yet they will survive, and the message of the Torah will spread to the world.