A “Lot” of Losses 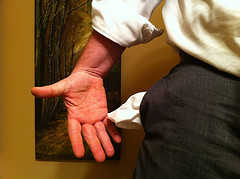 In this week’s reading, we learn about two wealthy individuals. Avram, as he was then called, gave up his local work and reputation to move to the land of Cana’an, where, he was told, he would receive much greater blessings. And, as promised, he prospered.

The Torah tells us that his nephew Lot journeyed with him, and prospered as well. Rashi tells us that the Torah isn’t simply reminding you that Lot was Avram’s traveling partner when it says [Gen. 13:5] “And Lot, also, who escorted Avram, had flocks, cattle and tents.” Why repeat the fact that Lot was going

with Avram? Because, says Rashi, that’s why he became wealthy — this is cause and effect. By being in the presence of such a holy person as Avram, Lot prospered.

Lot, however, didn’t understand the source of his blessings. The shepherds who worked for him would let his cattle graze on other people’s property, which Avram did not permit his own shepherds to do. The conflict between the shepherds is, as Rashi tells us, what led Avram to suggest that they split up, in order that there not be an argument between them and between their shepherds. Lot, of course, agreed.

And where did he go? To Sodom! At the time, as the Torah describes it, the territory around Sodom was extraordinarily fertile and vibrant — yet the people were evil. Lot chose the fertile land, despite the evil neighbors, over remaining with Avram. From a business perspective, it had all the makings of a good decision: his flocks would have more room to graze, on the best land available.

And what happened? He lost everything.

When Lot lost himself in material pursuits, he was willing to leave his holy uncle to go live among evil people rather than get his shepherds to behave correctly. And that, in the end, is what led to the loss of his fortune (and his wife). Following the more honest, more spiritual, more positive path will always pay off in the end — in more ways than one!