Last night my wife and I celebrated our anniversary in typically Jewish fashion: we went out for Chinese food. Initially we both ordered a dinner special, but in the waitress’ presence my wife changed her order to a slightly more expensive option. [For the locals, David Chu’s crispy chicken Szechuan style is outstanding, and well worth the extra $1.40.]

This is relevant because when we got our bill, I could see a mistake without reading Chinese: the amounts for both orders were equal. We had been billed for two dinner specials. So when the waitress came back, I asked her to please make the correction. 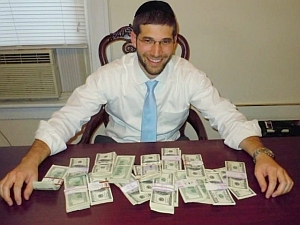 Did we have to do that? No. Because it’s not standard practice among the nations of the world to voluntarily correct an error in their favor, we are not obligated to do more. But that is really the nature of Kiddush HaShem — sanctification of G-d’s Name — doing something that everyone recognizes is “the right thing to do,” whether or not everyone does it. Not everyone gets to be Rabbi Noah Muroff of Connecticut, who became an international news item by returning $98,000 discovered in a desk he had purchased. But we should do it nonetheless.

In this week’s Torah reading, Moshe tells the people: “behold I have taught you decrees and laws, as Hashem my G-d has Commanded me, to do them in the middle of the land, which you are going there to inherit. And you shall guard them and do them, for this is your wisdom and understanding in the eyes of the nations, which will hear all of these decrees and say, ‘just a wise and understanding people, this great nation'” [Deuteronomy 4:5-6].

Today, it may seem obvious that telling the waitress about the error is “the right thing to do.” But the story is told of a young Jewish man who, unaware of the richness of his own heritage, went to Eastern nations searching for spirituality. He was walking together with his teacher when the latter picked up a wallet he found on the ground, and pocketed it without investigation. The student asked if he wasn’t going to try to see who had lost it, and he responded that this was unnecessary, that it was destined that the wallet be his good fortune. This was enough for a young Jew to realize that something was amiss.

Yes, in our countries it’s different. Everyone recognizes that a spiritual leader, of whatever kind, ought to be returning that wallet. But where do you think they learned this wisdom? Is there something like that in Aesop’s Fables? I don’t think the sort of people who threw prisoners to the lions for entertainment would give someone back his dropped handkerchief before throwing him in!

The paradox of today’s Western world is that it bases its moral values upon the same “wise and understanding people” that it so often despises, persecutes, and accuses of imagined violations of those same morals. A recent example would be the UN Human Rights Council (populated by the representatives of such bastions of human rights and dignity as Syria, China and Venezuela) accusing the IDF of “indiscriminate” shelling that, just coincidentally, was 3.5 times more likely to hit a male than a female.

The best way to respond to that is through personal example. It is said that when Rabbi Yaakov Kaminetsky was a young Rav in Tzitavyan, Lithuania, someone came to him because the post office had made an error in his favor during a transaction. Rav Kaminetsky told the person to go back to the post office and repay the amount of the error. This happened several more times; it turned out that the Postmaster was surprised enough the first time that he deliberately tested other members of the Jewish community to see what would happen. Although the Rav left for America in 1937, the community he guided had sufficiently impressed that Postmaster that he personally helped save many Jewish lives during the Holocaust.