A friend took the attached photo at the enclosure for the collared peccary, a species native to Central and South America (as you can see on the map), in the Jerusalem Zoo. In red letters and in three languages, the sign declares: the peccary is not a pig!! 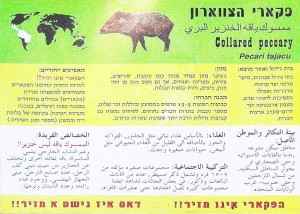 Biological taxonomy distinguishes between the Sus domesticus (domestic pig) and Pecari tajacu (collared peccary), as it does between Sus domisticus and Sus barbatus (the bearded pig) — but from a Biblical perspective, all three are certainly the “chazir,” the pig mentioned in this week’s Torah reading [Lev. 11:7]. It’s quite understandable why people make the “mistake” of thinking a peccary is a pig, because the domestic pig and peccary appear much more similar to each other than to the bearded pig, and all three look far more similar than assorted varieties of dogs (for example).

The same is true of the camel family. We might think of the camel as an animal with a hump, but all four species of the Camelid family found in the New World (llamas, alpacas, guanacos and vicuÃ±as) have none. When you look at their faces, one would have a very hard time telling any of the four apart from dromedaries and bactrian camels.

In these cases, appearances are not deceiving. What we see with our eyes is what the Torah tells us to expect: that regardless of where you travel, you won’t be able to confuse Kosher animals with anything else. All the animals that look like camels actually are — and they all ruminate but do not have a cloven hoof [11:4]. They are, as the Torah tells us, the only domestic livestock that have this pair of characteristics. [The Torah also identifies two wild animals which ruminate but do not have cloven hooves; there is some debate about what they are.] All varieties of pig, including the peccaries, have the opposite pattern: they have cloven hooves but do not ruminate. In this, they are even more unique, as no animals, domestic or wild, share this combination.

The Talmud (Chulin 59a) takes this even a step further, from the Oral Law: you can check the mouth of an animal whose hooves have been cut off: if it has no upper front teeth and you know it isn’t a camel, it’s a Kosher animal. And of course, if you know what a pig looks like, you needn’t check the mouth: anything else that has cloven hooves is Kosher.

This is true all over the world — even on continents unknown to Eurasians until hundreds of years ago. The Torah boldly proclaimed that no other livestock have one characteristic and not the other except these two animals, which no tribe wandering the Middle East at the time could possibly have known. The Torah even knew that the peccary, a family of animals found only in the New World, is indeed a pig!