Restoring and Spreading the Light

Chanukah is one of only two celebrations added to the Jewish calendar by the Rabbis, the other, of course, being Purim. Rabbi Yosef Karo points out that unlike Purim, which has an obligation for a celebratory meal and rejoicing, Chanukah is about singing praises and giving thanks to G-d for what He did for us. 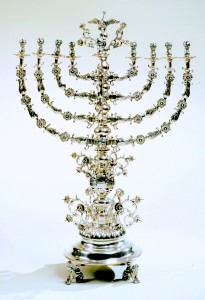 It appears that the reason that they did not establish rejoicing here as they did for Purim, is because on Purim the decree was to kill and destroy the bodies [of the Jews], which is the nullification of festive meals and rejoicing, rather than their souls. For even if Jews would have been willing to abandon their faith, Heaven forbid, he [King Achashverosh] would not have accepted them. Therefore when the Holy One, Blessed be He, saved [the Jews] from him, [the Rabbis] established to praise and glorify Him, Blessed be He, also by way of festive meals and rejoicing.

This is not the case with regards to the actions of Antiochus, who did not decree upon them that they be killed or destroyed, but rather difficulties and spiritual annihilation in order to make them abandon their faith (as we say in our prayers during Chanukah, “to make them forget Your Torah and to take them away from the laws of Your Wishes”). If Israel had subjugated themselves to them, and had been oppressed beneath their hand, had paid taxes and turned to their faith, Heaven forbid, they would not have asked for more.

Rather, the Holy One, blessed be He, strengthened the hand of Israel and made them victorious. For this reason, [the rabbis] only established praises and thanks alone, meaning, since they wanted to prevent us from these things, to deny our faith Heaven forbid, and with His help, Blessed be He, their plot failed and our hand overcame, for that reason we give thanks and praise Him for being our G-d and that we did not abandon His service.

“Ki Ner Mitzvah v’Torah Ohr” — “For a Commandment is a candle, and the Torah is light.” There are two ways to destroy the Jewish people: physical annihilation as done during the Holocaust, and spiritual annihilation, as so many are sadly doing today via assimilation. The Mitzvah of Chanukah is to spread the light, to thank and praise G-d, to encourage the study of Torah — to do those things that keep us alive as a Jewish nation.