Prior to Shavuos, our family went to a Sunday brunch celebrating the Bat Mitzvah of a cousin. At some point, I found myself in conversation with the uncle of the honoree, also a cousin and, of course, of my own generation. One of us got a text message, I believe, which turned the conversation to smartphones and the next technologies on the way. Although we’ve known each other essentially all his life (I have about five years on him), he eventually commented that he had to adjust mentally to the idea of talking about high-tech with someone looking like a yeshiva (traditional Rabbinic school) alumnus. 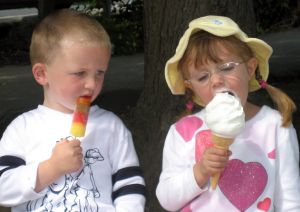 To those not familiar, I suppose it’s rather easy to confuse Orthodox Jews with the Amish, or the ascetics of other communities who shun technology, marriage, and other pleasures. But that is not what the Torah asks of us. As Maimonides advises us, the Torah looks for moderation in most every area.

In our reading this week, the head of each Jewish tribe brings an inaugural offering upon the completion of the Tabernacle. Each of those offerings was precisely the same. Yet the Torah, concerning which we are taught that every letter is holy and none is wasted, describes each offering in full detail, allocating the same six verses to repeat, practically word for word, what each Nasi brought on each day. Achira ben Einan of Naftali’s offering on day twelve is described with all the details of Nachshon ben Amminadav of Yehudah’s on day one. What’s the point of all that repetition?

Rabbi Shmuel Greinemann explains that it was no accident that Nesanel ben Tzuar of Yissachar chose, on the second day, to bring precisely what Nachshon ben Amminadav brought the day earlier. He knew that each of the tribes could engage in one-upmanship, compensating for and taking advantage of going later in line to bring something greater than the other Nesi’im had brought so far. Instead, Nesanel ben Tzuar chose a path designed to avoid any hint of jealousy, and to generate feelings of love and brotherhood. And every Nasi followed suit. That was what was so precious about each and every offering, warranting that it, too, be described with the same level of detail in the Torah itself as all the others.

We live at a time where keeping up with (and outdoing) our neighbors is a fine American (and even global) pastime. That is what the Torah asks us to avoid: to engage in moderation, live within our means, and encourage brotherhood rather than jealousy. And if we want to know how precious that is to G-d, we merely need to contemplate how much space He allocated in His Torah to ensuring that each Nasi was recognized for his personal contribution in this area.