We’re all in This (World) Together

With an insight that my friend Rabbi Leonard Oberstein called prescient, the very first comment of Rashi on the Torah quotes a Medrash:

Rebbe Yitzchok says: He did not need to begin the Torah [here,] but from ‘this month will be for you the first of months’ [Exodus 12:2], for that is the first Mitzvah that Israel is Commanded to follow. What is the reason to begin with ‘The beginning?’… That if the nations of the world will say to Israel, ‘you are thieves, for conquering the land of the seven nations,’ they will say to them, ‘all the world is the property of the Holy One, Blessed be He. He Created it and Gave it in accordance with what is right in His eyes. By His Will He Gave it to them, and By His Will He Took it from them and Gave it to us. [Yal. Shim. Ex. 247] 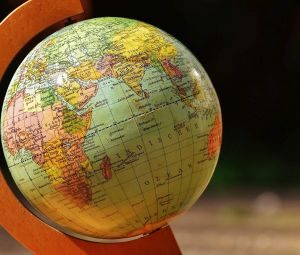 This Torah portion teaches many other lessons that are as relevant today as ever. The idea that we have a single Creator, Ruler of heaven and earth, is one example. Much as Kant and others attempted to prove otherwise, to truly live a moral life requires that we acknowledge a standard greater than our own, one that we must follow even when, frankly, we don’t want to. Monotheism enables and indeed requires that single, objective standard. Under polytheistic idolatry, the wishes of one “god” often contradict the desires of another; when we ourselves determine morality, our judgment is clouded by temptation and self-interest.

We also learn that we were created in the image of G-d. Every person has a spark of Divinity within him or her. Every life has infinite value, and thus the preservation of life becomes a critical responsibility of every person.

We learn the brotherhood of man. All of humanity are brothers, descended from a single father and mother. We cannot ignore “our brother’s blood.”

We even learn our responsibility as custodians of the earth, as Hashem gives to Adam and Chava rulership over all other creatures, bringing each one to Adam to name, and gives all growing things to them to eat.

It is no coincidence that anti-Semitism accuses Jews of opposing all of these values. Besides “stealing” the Jewish homeland, Jews are accused of killing non-Jews at will and destroying the earth, and considering non-Jews to be subhuman (there’s even a concocted quote from the Talmud to prove it)!

The lessons of Judaism serve as their own rebuke to these nonsensical canards. We are all one human race, like it or not, says the Torah. All that the Western world now calls “Judeo-Christian ethics” emerges from the Torah’s lessons, guiding us to perfect ourselves — to live as godly individuals. We await the day when “all who dwell on earth will recognize and know that to You every knee should bendâ€¦ As it says, ‘And Hashem will be King over all the land, on that day Hashem will be One, and his name One.'” [Zechariah 14:9]

As we begin to read the Torah for another year, let us remain mindful of its ability to transform and elevate us like nothing else!